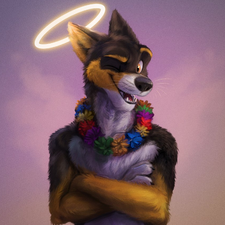 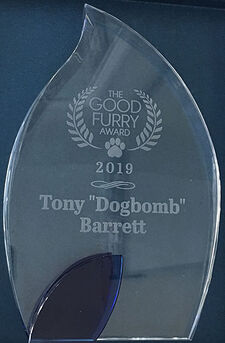 Dogbomb was a Paraveterinary worker with decades of experience and an avid runner. He was also the head of the Orange County Gay Runners Meetup Group.

Dogbomb was diagnosed with Amyotrophic lateral sclerosis (ALS) in March 2018 and given a prognosis of one to three years.[1] In the aftermath of his diagnosis, he was noted in the fandom for his unyielding positivity, remaining active despite his symptoms.[2]

Dogbomb participated in an early-stage clinical trial to attempt to stop the disease, and with the help of the furry fandom raised money in the name of ALS research.[2] On March 29, 2019, he announced on Twitter his decision to end his life, clarifying that he would end his life on April 5. His final message was sent on Twitter at 3:00 PM, Pacific Standard Time. It reads:

Dogbomb said that his body was willed to the UCI Medical School, with a message of encouragement for the medical students practicing on his cadaver.[4]

Tony was the featured marathoner for the 2019 installment of The ALS Association LA Marathon. Tony's bio, as written by himself, encourages others to support the fight against the brutal disease, that takes away the last hope. The bio can be found on their site.

Capital City Fur Con selected the ALS Association as the charity of the 2020 convention "In honor of our beloved community member Dogbomb".[5]

Dogbomb discovered the furry fandom after being referred to as one by a friend.[6]

He gained fame on Fur Affinity in August 2010 when he posted a photo of himself in his fursuit posing with a wheelchair-user named Sarah.[7] He used the summary to write extensively about his short time with Sarah, who has cerebral palsy and is paraplegic but is also able to use her facial muscles to smile. The resulting outpouring of plaudits for both Sarah and Dogbomb by users of the site climaxed with a one-week dedication of a special FA banner created by Aurora Borealia in honor of Dogbomb[8][9].

On 2019, Dogbomb was nominated for The Good Furry Award 2019 for "outstanding spirit in the furry community".[10]

Dogbomb's character was a German Shepherd modelled after his late pet dog, Rodger.