Doctor Who is a British science fiction television program that follows the adventures of a mysterious alien time-traveller known as "the Doctor" (currently played by Peter Capaldi) who travels in his space and time-ship, the TARDIS, which appears from the exterior to be a blue 1950s police box because of a broken chameleon circuit(and is much bigger on the inside than the outside), along with his companions, exploring time and space, solving problems, facing monsters and righting wrongs.

The program is listed in Guinness World Records as the longest-running science fiction television show in the world and has been recognized for its imaginative stories, creative low-budget special effects during its original run, and pioneering use of electronic music. The program originally ran from 1963 to 1989. After an unsuccessful attempt to revive regular production with a 1996 television film, the program was successfully relaunched in 2005, also spawning spin-offs in multiple media, including the current television programs Torchwood and The Sarah Jane Adventures, and the 1981 pilot episode K-9 and Company.

The Doctor is a member of the Gallifreyan Time Lords, a race of humanoids who are indistinguishable from humans from the outside, but are very similar inside, having similar concepts such as war, government, philosophy, humor, etc. and having remarkably similar anatomy, for instance, having blood and 2 hearts (referred to as a "bicardial vasculatory system" by the characters). The Time Lords also have extremely advanced technology, most notably and obviously time travel, as well as having a variety of sonic devices, including sonic disruptors, sonic cannons, and sonic screwdrivers (the Doctor's personal favorite, because he does not believe in harming other beings). Time Lords can also regenerate 12 times in their lives (giving them a total of 13 incarnations), during which process time lords are engulfed in a brilliant orange light, after which the time lord's body will have changed and he/she will be able to regenerate progressively smaller wounds for 56 hours. complex personality traits will change as well, for instance, a time lord may have OCD in one incarnation and not have it in the next; but basic personality traits will remain the same, such as compassion or hate. Baring running out of regenerations, Time Lords are immortal and can supposedly survive until the end of time, a theory which they never got to test, because the entire planet was "burned" by the Daleks, a hateful race at war with the Time Lords which have often been compared to rolling spice racks. because of this, the Doctor is considered to be the last of the time lords, and his obsolete type 40 TARDIS is considered to be the last great time lord artifact, however, Time Lords crop up every now and again in the series, usually dying and leaving the Doctor in great pain. the most notable of these survivors are the Master, the Doctor's clinically insane enemy who was shot and willfully held back his regeneration in the episode "last of the time lords", and jenny, a "clone" of the doctor who was created by taking a sample of the doctor's DNA, ripping it apart and throwing it back together in a random order. she was also shot, in the same episode of her "birth", while defending her "father". The Doctor is currently 907 years old and on his 11th incarnation.

Over the years, the show has featured many anthropomorphic aliens, most notably the Catkind of New Earth and Gridlock, the rhino-like Judoon of Smith and Jones and the Cheetah People of Survival. The show has also offered werewolves, yeti and others, as well as a robotic talking dog called K-9.

A Catkind named Brannigan as seen in the episode "Gridlock" (2007) 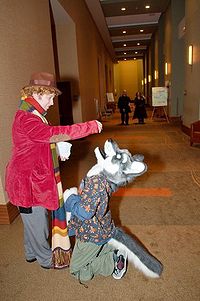 A Doctor Who cosplayer interacts with a fursuiter.

Notable Doctor Who cosplayers in the furry fandom include Ken Redtail who plays the Tom Baker and Peter Davison Doctors and Colley who plays both the Colin Baker Doctor, and formerly the David Tennant Doctor.