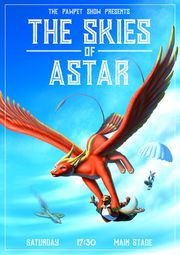 The seventeenth DoPE show, performed at Eurofurence 23, was titled "The Skies of Astar".

The plot given in the show's promotional flyer read:

"The Skies of Astar" - Openening Credits on Youtube: https://www.youtube.com/watch?v=xXk3w_Hg4Bo