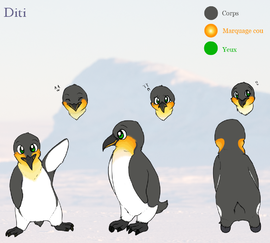 Diti (in full, Dimitri Torterat; born May 26, 1990)[1] is a furry lifestyler who lives in Sucy-en-Brie, France.[2] His personal furry is a green-eyed Emperor Penguin.

His first contact with penguins has been established at the shopping mall, seeing a French nature documentary movie called La Marche de l'empereur (March of the Penguins).

Intrigued by the animal as well as the movie, he searched about Emperor Penguins and the movie until discovering the realisator's website.[3] Some days later, after having listened Émilie Simon's “The Frozen World” from the original soundtrack La Marche de l'Empereur during whole days, he eventually bought the DVD as well as Émilie Simon's audio CD, and his interest for Emperor Penguins began to grow as and when he watched it more and more times, his favorite music passing during the mating scene.[4]

France is almost the only country on the world in which the word “penguin” isn't translated to a similar term.[5] Indeed, the French word pingouin relates actually to an auk, while a penguin is actually called a manchot.

Thus, the very large part of the French population keeps thinking that penguins are called auks, which causes factual mistakes like “Emperor Auks” to be very usual.

From the injustice feeling of seeing his hence favorite animal not to be called as he should be made Diti become a defender[6] of penguins.

Even though Diti was fond of animated movies, he watched Happy Feet very lately because this movie has been almost unseen in France. He came randomly across on a Spanish copy of it on Stage6 and decided to download and watch a Quebec French copy afterwards. Obviously liking the penguin-related movie, he bought the DVD as well and watched it in French.

Disgusted by characters' voices (especially Mumble's "catastrophic dubbing" by Clovis Cornillac), he attempted to watch it in English.

He then fell in love with penguins, by both what he has seen in this movie and his previous liking for them. At the same time, he began to identify himself as a penguin.