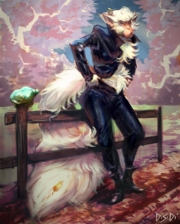 Disidi, previously known as Earwig and Gasmask, (born February 28, USA) is a female artist who lives in Edmonton, Alberta, Canada. Her major persona among the furry fandom is Disidi, an anthropomorphic snow monkey/housecat hybrid.

Disidi works exclusively with digital media, and her favourite subjects are science-fiction, horror/macabre, and post-apocalyptic themes. She is a SFW (non-adult) artist, though has done tasteful nudity before. Her characters are often monsters or uncommon species. While she can draw any species, she will also happily draw humans, monkeys, and great apes. She livestreams her artwork on Picarto.tv and Twitch rather frequently, and often takes in-stream commissions.