This is an article about the species. For topics that share the name, see Dingo (disambiguation)

The Dingo (plural: dingoes or dingos) is a canine carnivore, although they can be scavengers at times. They are actually not native to Australia and are thought to have come from Southeast Asia with sailors and from modern-day Israel even further back where bones quite similar to theirs were found. Scientists differ, however, on whether they are their own species, or a subspecies of Canus lupus (like normal dog breeds). When raised from birth in domesticity, they are described as highly sensitive and gentle pets, but in recent years, they have been hunted and poisoned recently in Australia due to unprovoked attacks by dingos on humans. 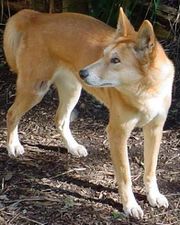 Dingoes do not generally form packs; they more often travel in pairs or small family groups. However, they are capable of forming larger packs to hunt cooperatively.