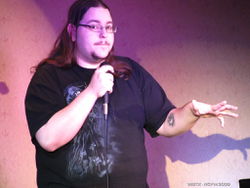 Deyna T. Otter, a.k.a. Donald Jerome Moore (born December 6, 1985), is an amateur writer, comedian, poker player and poet who lives in Cincinnati, Ohio, USA. He currently works as a bartender and low stakes poker player. Deyna has been the Director of Sponsors' Lounge at Furry Connection North since 2009.

Donald was born on the Kentucky side of Cincinnati, Oh and then moved to the northern Suburb of Loveland, Oh when he was two. He went to catholic schools til 5th grade when he switched to public school. He was diagnosed as a child with depression, ADHD and bi-polar disorder and given strong anti-depressants and amphetamines since the age of ten. Donald admits that he developed an addiction to the amphetamines through most of middle school and early high school, often taking as many as two weeks recommended dosage over the course of 12 hours. While in this stage, at the age of thirteen, he attempted to rob a gas station and was arrested. Tried with attempted robbery, Donald was sent to a minimum security residential treatment facility in northern Kentucky for eighteen months.

At the age of eighteen, Donald refused to take any more prescription medicine and weaned himself off. He has been living without them since and has had no relapses.

While in high school, Donald turned to online social networks, IRC Channels and various forums for anime and cartoons, and discovered furry art in the process. After chatting online with various people, he started visiting furry IRC channels and websites on a regular basis. He adopted his otter persona, Deyna Tibberius Otter II, drawing inspiration from Brian Jacques' book Taggerung from the Redwall series.

Deyna has been active in the convention scene since Midwest Furfest in 2004 and has attended several conventions around the U.S. In 2008 while visiting Gir Tygrin and Nik Vulper he volunteered to help with the Sponsors' Lounge at their new convention Furry Connection North and was asked to be on staff for 2009. Before FCN 2009, the prior director of Sponsors' Lounge stepped down due to personal reasons and Deyna was asked to take his place as an interim director. After working the convention, Deyna was asked to stay on as director for 2010. Deyna has announced that he will be returning to be director in 2011.

Deyna made his comedic debut at Rocket City Furmeet 2006 during the Open Rant with 2. He, along with Isfacat and Bucktown Tiger, were recognized as the funniest people in the room, with Isfacat winning first, Bucktown Tiger winning second and Deyna taking third (Isfacat went on to open for 2, The Ranting Gryphon at the next RCFM). Deyna returned to RCFM 2007 and re-entered the Open Rant, taking second place while Bucktown Tiger and Mrs. Goblin tied for first.

In September of 2007, Deyna, along with his friends Isfacat and Bucktown Tiger, was asked to be a part of the Flea Collar Comedy Tour at Mephit Furmeet. Along with Adric Verminus and Tahamaki, the group suceeded in making the room roar with laughter.

Deyna was asked to perform at Oklacon with his friends Isfacat and BuckTown Tiger, but had to cancel due to his financial situation.

At Rocket City Furmeet in 2009, Deyna was the opening act for Isfacat.

Deyna's comedic style can be described as observational, self-depriciating and non-sequitur, mixed with impersonations of Ozzy Osbourne and other music celebrities.

Pedro Armanda is a tabby feline character in the Shadow series written by Deyna T. Otter. He is Manuel "Shadow" Martinez's close friend and mechanic. He is also Maria Lightning Cloud's boyfriend.

Maria Lightning Cloud is a coyote character from the Shadow series written by Deyna T. Otter. She is a close friend and ex-lover of Manuel "Shadow" Martinez. Maria is paralyzed from the waist down but is highly intelligent and works as Manuel's secretary and computer mastermind. She is one of the last of the Apache tribe, her Native name being Spirit Runner, a reference to her physical condition and how she lives very fast paced, despite her handicap. She is Pedro Armanda's girlfriend and lives with him in New Sacramento.

Deyna is an ameteur poker player with aspirations to turn pro. He is striving to hone his skills and increase his seed money to be able to play in the World Series of Poker's $1,500 No Limit Hold 'Em event within the next 5 years.

In 2008, at Midwest Fur Fest in Wheeling, IL, Deyna took second place in the Charity Poker Tournament to Aiden Raccoon. While he entered heads-up the chip leader, an all-in call reduced him to a 3:1 underdog and eventually garnered him a 2nd place finish.

In December of 2008, he attended the Cincinnati Reds "Redsfest" Charity poker tournament. He finished in 95th place out of 560+ entrants, and did not win any prize money.

In April of 2009, at Furry Connection North, he finished 10th in the charity poker tournament.

In May of 2009, at Rocket City Furmeet, Deyna was eliminated during the semi-finals of the charity poker tournament.

Deyna is a regular at the poker room in the Hollywood Casino (formerly Argosy Casino) in Lawrenceburg, IN. His games of choice are $1/$3, $2/$4 and $2/$5 No-Limit Texas Hold'em and $3-$6 Limit Hold'em. He enjoys playing Pot Limit Omaha (PLO), Limit Omaha Hi/Lo Split, 7-Card Stud Hi/Lo split, Razz, 7-Card Stud Hi and 2-7 Lowball Triple Draw but prefers tournaments to cash games. The dealers at the Hollywood Casino know Deyna as "Otter" because he carries a little plush otter with him at the tables. The otter's name is "Splash" and Deyna uses him to amuse and distract opponents at the table.

Deyna plays irregularly online on Pokerstars.com, Fulltilt.com, Cakepoker.com and Doylesroom.com under the screen name "Deyna_Otter". He can usually be found playing Mixed Games and Limit Hold'em for low and "micro" stakes.