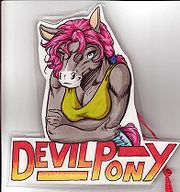 DevilPony as drawn by Pegasus316

DevilPony (born September 21st, 1983, outside Washington, DC) is a furry from York, Pennsylvania.

DevilPony's mane and tail are both flamingo pink, her mane usually wild and unkempt.

Devilpony was born on September 21st, 1983, in a suburb of Washington, DC. She spent most of her childhood and young adult years in and around Frederick, Maryland, before moving to Pennsylvania to attend the Baltimore School Of Massage. She graduated in 2006 with a certificate in Medical Massage Therapy. Unfortunately, due to unforeseen health problems, she no longer practices massage therapy. She is currently studying Corporate Communications at Central Pennsylvania College in Harrisburg, PA, with a heavy focus on event planning and public relations.

Devilpony has been involved in planning meet-ups and general furry gatherings since late 2005, and ran a series of informal meets for local furries in the Central Pennsylvania area regularly until March 2010. She still organizes meets, but on a much more sporadic basis due to time constraints.

In real life, DevilPony is a finance analyst, assisting small business owners purchasing products from the wholesale technology firm she has worked for since late in 2007. She takes operatic-style voice training lessons, crafts, and is a writer and poet.

She recently discovered a love and appreciation for both donkeys and mules within the past several years, and now actively works to promote them as viable options for other equine enthusiasts, and working towards her goal of raising and training the critically endangered Mammoth Donkey. In the meantime, she contributes her time assisting potential "long-ear" adopters with questions about mules and donkeys.

DevilPony also enjoys the sport of geocaching, and currently nurtures a love of natural history. One of her least-discussed passions is prehistoric life.