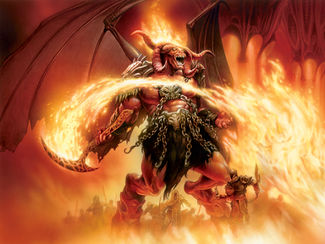 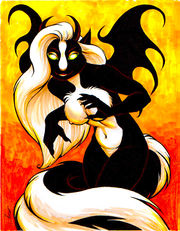 A demon (Greek: δαίμων [ðaïmon, daemon, dæmon, or daimon]) is a mythological, malevolent supernatural being that originated in human folklore and/or religion. Also known in Christianity as a fallen Angel.

Demons can take any desired appearance, although the general accepted look is that of a being, black or red skinned, with hooves, forked tail, horns, and sometimes winged.

A "demon" in furry circles is a species of furry that is related to the religious creature closely associated with the notions of "evil" and/or "hell". In social furry interaction, demons are often just very hedonistic rather than truly "evil", but this is by no means a rule.

Most often, furry demon appearance is a modifier applied to another species. Certain features are added to the base species; horns, usually of either bull or ram style, crimson fur or hairless crimson skin, sharp fangs, bifurcated hooves, spaded tails, and bat or dragon-like membranous wings.

Two of the more popular type of demons portrayed in the fandom are the seducing Incubi (incubus) and Succubae (succubus).