David and the Phoenix

From WikiFur, the furry encyclopedia.
Jump to: navigation, search
Culture > Publications > Novels > David and the Phoenix 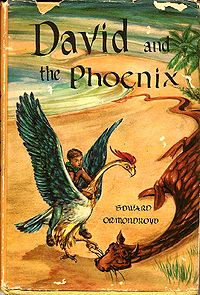 Cover of David and the Phoenix.

David and the Phoenix is a book from the Weekly Reader Children's Book Club. It was written in 1957 by Edward Ormondroyd and illustrated by Joan Raysor.

The text on the book's inner flap reads:

David knew that one should be prepared for anything when one climbs a mountain, but he never dreamed what he would find that June on the mountain ledge. There stood an enormous bird, with a head like an eagle, a neck like a swan, and a scarlet crest. The most astonishing thing wast hat the bird had an open book on the ground and was reading it! This was David's first sight of the fabulous Phoenix and the beginning of a pleasant and profitable partnership. The Phoenix found a great deal lacking in David's education-- he flunked questions like "How do you tell a true from a false Unicorn?"-- and undertook to supplement it with a practical education, an education that would be a preparation for Life. The education had to be combined with offensive and defensive measurements against a Scientist who was bent on capturing the Phoenix, but the two projects together involved exciting and hilarious adventures for boy and bird. A wonderful read-aloud book, adventurous and very funny, with much in the magic as well as the humor of the fantastic.