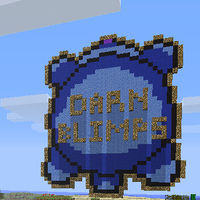 Darn Blimps was a furry Minecraft server founded in February 2011 by Alexander Grey, Darakan and Glaz.

True to its name, Darn Blimps was primarily used by members of the fatfur and inflation communities, although was open to anyone—furry and non-furry. The server was composed of several distinct settlements ruled by individual mayors, although players were permitted to build anywhere.

The server operated in survival mode (where enemies can harm the player), however catered to creative types by having stores where items can be found without having to craft or mine them.

Darn Blimps was initially open to the general public until it was griefed in December 2011, after which players had to be whitelisted to access it.

In November 2012, the server was taken over and closed by Flaw with the intention of relaunching it as a modded survival server[1], however this plan never came to fruition.

A running theme throughout the server's history was the foundation of towns and cities, designed and administered by individual players.

At the time of the server's closure, the primary settlement was Ilmarinen, the capital city of the third world. Ilmarinen was built to resemble a contemporary metropolis with looming skyscrapers and paved plazas. Prominent areas of the city included the Darn Blimps Hall of Fame, a memorial to "The Battle of the End", and Update Square—an area that provided demonstrations of new features added in each Minecraft update.[2] Ilmarinen was named after the mythological Finnish artificer of the same name.

The release of Minecraft's Adventure Update dramatically changed how the game generated terrain and spawned natural structures. As a result, the existing world was archived and a new world created. 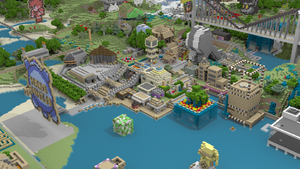 An isometric 3D rendering of Montgolfier.

Several players could also set up base outside of any settlement. Countryside areas were additionally decorated with sprite artwork common to creatively-oriented Minecraft servers.[3]