Darklord is a female furry artist living in upper Canada. She is known to do almost exclusively mature and adult rated pictures, and is currently[when?] producing a video game by the name of Vore Fable. She has multiple characters at her disposal; however, by far her most prominent is Lorane Airwing-McManus. She does not do commissions, but prefers to do trades instead, even if the other party is lesser skilled. She is also known to spontaneously ask other furs if she may produce art for them. Also goes by the names of: Lorane, Sabrina, darklord92, DL or DL92. She is happily mated to Ky-Guy.

Darklord has several characters under her name including a species. 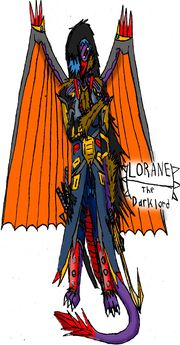 Lorane in full armor click for a larger image
Lorane is Darklord's most used and known character, who was created to be an accurate mirror of herself. Anything in her personal life she's willing to share has the chance of eventually ending up as a often comical picture with her as Lorane. She is an Anivarian-Viper dragon, originally a hawk-anivarian hybrid however after meeting Zato Airwing. When they became very close friends, they engaged in an RP which ultimately changed Lorane's shape permanently to be half viper dragon. About a month after the said RP, Zato and Lorane entered into a pet mistress relationship, which is still together to this day. Both Lorane and darklord are very closely tied to Dravus Airwing, he being the one who introduced her to the Furry Fandom; in terms of characters, Dravus is her adopted/unbirthed son. Her name was originally Sier in terms of history; however, this history was only a recent addition to Lorane's "pre"-life. She has multiple children, all other furries who are closely connected to her, and she also has several pet/Mistress relationships with other furs as well. More information can be found here: RP repository-Lorane Byron McManus

Lorane is dragon like in form; however, she retains many avian features from her Anivarian half, namely the large amount of feathers on her hips, legs, arms, chest, and wings, as well as a unique beak. Her underbelly is red in color and very soft despite being covered in a thin layer of scales. Her body, apart from her underbelly, is covered in two layers of thick, purple scales.

Mira is Lorane's daughter and Dravus Airwing's half clone, containing parts of his genetic code. However, she lacks the latter's magical abilities.

The Anivarian species is a bird like species created by darklord, and its members are known for their advanced society as well as possessing many unique characteristics. More info can be found here: RP repository-Anivarians