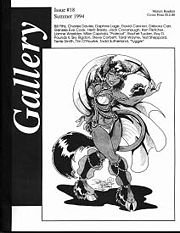 Daphne's work was featured on the cover of Gallery 18
Daphne Lage is a writer and former furry artist originally from Valencia, Spain. As of 2006 she resides in New York, New York, U.S.A. She and Jose Calderon created Tall Tails, a furry comic serialized (for some time) by Radio Comix's Furrlough. Their work (The Collected Tall Tails: Thieves' Quest, vol. 1) was nominated for an Ursa Major Award for Best Other Literary Work. She was also featured in Hit the Beach, as well as various furry fanzines, including Furloose!, Bestiary, Huzzah, Midnight Sands, Gallery and Furplay[1], and published her own portfolios under the titles Anthronouveau, Outlaw Vixens and The X-Furries, a spoof on The X-Files. She worked with Tygger Graf to create another portfolio, Guardian Knights,[2] and helped Jose with Furkinde Prozine.[3]

Daphne Lage was a guest of honor at Albany Anthrocon 1997.

Daphne finally announced[8] sometime in mid-to-late 2000 that she was leaving the fandom; Michael Hirtes claims[citation needed] this was partially due to harassment by fans; this may be some level of projection, considering his own reputation for harassing artists, especially those who have previously contributed to Furplay. She continued to publish her comic, but withdrew her "secret" website and was no longer seen at furry conventions (she still attends Comic-Con International).