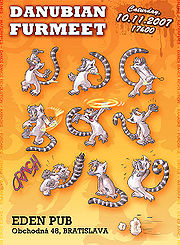 The Danubian Furmeet is a furmeet organized by Tabbiefox,[1] and which takes place in Bratislava, Slovakia.

The pilot meet was held on November 11, 2007. It was host to about 30 attendees, from Slovakia, Austria and Czech Republic.

On August 21st, 2010 the second meet is planed be held at EMPIRE CLUB. An official web presence was installed on July 19th 2010 for promotion and pre-registration.