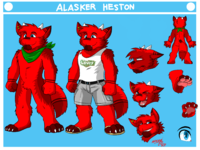 Danté Alasker Heston is self-taught artist. He loves playing video games, as well as giving some musical shows for free. He owns a fursuit.

Heston's fursona is a red-furred hybrid of dragon and wolf.[1] He has blue eyes and a big muzzle with teeth showing at each side of his mouth. On his head he has two small curved horns. His ears are a bit long, giving them an appearance like those of a canine.

Heston's hindpaws are similar to those of a wolf, being red and fluffy. His forepaws are different; each one has three large claws, like those of a dragon. The pawpads are yellow. His tail is broken. He wears a bandage on the tip of his tail, that being the most sensitive part.

Being practically a feral, he does not wear any clothes, since his fur covers him completely. 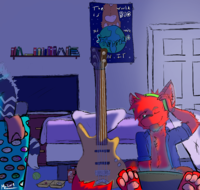 Cover for 'Red Before Dawn by Mace Zerimar.

Heston has been working on a musical project entitled Red Before Dawn under Distrokid, being a record of 10 songs, telling different stories that people could relate to. The album was released on December 27, 2019, a clean version released along it.[2]