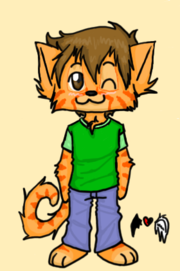 Dan first heard of the fandom in late 2003, but paid little mind to it, soon forgetting about it. A few years later, while researching about hybridization for a school project, he stumbled upon the fandom again. This time something clicked, and kept his attention, as he spent more time researching it.

In early 2008, he found a furry community at Gamespot forums, which led him to Furaffinity. While still new to the fandom, be met a few other younger furs, who led him to Furry Teens Forums. Dan generally spends his time now on a few forums, Furaffinity, and the IRC chatrooms.

Dan currently has one main fursona, with two alternates.

One thing Daniel has become recognizable by, is his main fursona, Dan, wearing a fez. This has led to be known by many as the 'FezCat'. The icon itself came from Tod Wills' Icon Days on Livejournal. To deter requests of copywritten characters, users were threatened with getting a cat in a fez. With the matching fursona, Dan then requested the icon as such, leading to the well-known icon.

At the end of 2010, Dan started taking a look into participating in meets and conventions.

as well as a handful of other local events.

In early 2011, Daniel obtained a pre-made partial suit from Spiritwolven.

Outside the fandom, Dan is usually not without a camera, as photography is a major hobby.