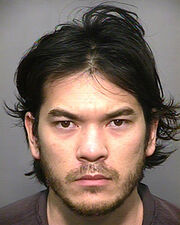 DangerDoberman's fursona is a doberman.[2]

In 2009, WILDWULF was arrested for 200 accounts of sexual assault of an animal, and 200 counts of aggravated animal abuse after photos of him engaging in sexual acts with his pit bull was reported to the Oregon Humane Society.[3] WILDWULF admitted to sexually abusing his dog over 400 times in a five-year time period,[3] but the charges were later reduced to a total of six.[4] He was sentenced to a year in jail, a $500 fine, five years of probation, and mandatory "sex offender treatment", in addition to being barred from owning animals (during treatment) or having contact with "Rocky", the dog he had abused.[5]

On June 27, 2016, Danger was arrested in Coconino county, Arizona along with Shane Tebo (Pokey Pony) for shooting a driver they believed was driving under the influence of alcohol, after forcing him off the road and into a ditch.[6] He was booked on attempted second-degree homicide, aggravated assault, disorderly conduct with a weapon and disorderly conduct, but only spent 75 days in jail.[7]

Third arrest and extradition to Oregon[edit]

Brandon Vongthongthip was arrested in Arizona[when?] on a nationwide warrant issued by the state of Oregon for parole violations relating to a previous conviction and extradited to Oregon where he was sentenced to two years in prison. He received a year in prison for each conviction where probation was revoked. [8] He is also facing possibility of additional 10 years of jail time in Arizona "if the trial is lost".[9] It is most likely the trial in Arizona is related to the shooting incident from 2016.

After his release from prison for the shooting incident, Danger posted that he had undergone a spiritual revelation.[10] He also announced that he would no longer be drawing pornography[11] and would be deleting all such material from his galleries. This was never done, and Danger returned to drawing pornography.[citation needed][when?] On e621, his tags and pictures were removed from the database.[citation needed][when?]