Damion Pincer is a Doberman character in Extinctioners. 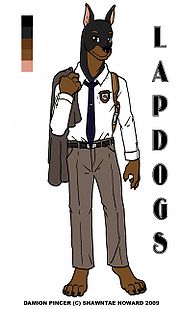 After many years of hard work and showing much initiative, Damion has made the rank of Detective. He's a very strict by the book sorta guy, which often finds him in conflict with his partner, who is a more by the seat of your pants sort of detective. Damion spent most of his early career as he did in college, hard working but with zero social life. He grew up in a poor, single parent home with his mother and sister, and vowed that he would do them proud when he grew up. He kept his nose in a book as well as kept it clean when earned him much notice from his superiors.

Some consider him a bit of a killjoy during social events, due to his unwillingness to loosen up and unwind, but his fellow officers know that if they have anyone on the force the can one hundred percent depend on it's him.

During a case to take in Lynx Wylde, Damion with his partner found that they had to go a bit beyond their directives to bring him in, which caused Lynx to receive a hung jury verdict and resulted in Cassie Collins' first, technical defeat as a lawyer. During Wylde's bail, he threatened the life of Cassie, in which Damion helped come to her rescue, which almost cost him his life.

Afterwards, Cassie and Damion have been meeting more socially. They still aren't what you'd consider to be dating, but at least for once in their life, they have a friend they find they can finally relax a bit more around. The potential for romance with Cassie for Damion, however, may meet a bit of a road block due to one of Cassie's old college boyfriends.