From WikiFur, the furry encyclopedia.
(Redirected from Daisy Archanis)
Jump to: navigation, search
Lists > of characters > in comics > List of characters in Last Res0rt

This is a list of characters in the webcomic Last Res0rt.

In keeping with its science-fiction roots, none of the furry characters shown so far are of 'typical' furry species found on Earth, such as a fox or skunk, although they may look similar or have traits akin to comparable species.

Unlike other alien species, such as the Skiltaire, not all of these species may have extraordinary traits compared to humans. 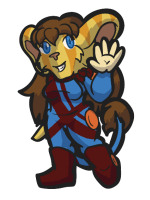 An alien volunteer on Last Resort, from a feline/marsupial species known as the Talmi. After failing to make the initial cut onto the show due to her inexperience, a brief demonstration of her skills to Cypress soon earned her the job.

Jigsaw is the fourth and final Executioner selected for the show, after being inadvertently thrown to victory (and through a wall!) by Arikos. 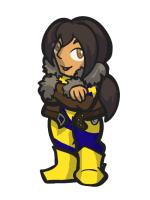 A human volunteer, Jason Spades (aka The Ace of Spades) is a minor celebrity on his home planet of Fenirel. Often seen with multiple eyebrow piercings and wearing a bomber jacket, with a cocky attitude to match.

Jason is motivated by the chance to execute Daisy Archanis, one of the more 'infamous' criminal volunteers. While his true motives (and the extent to which they motivated him to volunteer) are unclear, he believes it to be part of his patriotic duty to kill her.

Jason was the third Executioner selected, after emerging as the last man standing from the Sniper trials. 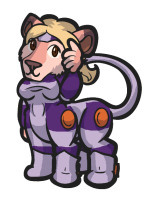 Pink Lion Centaur with blonde hair from planet Sevru. Her grasp of language is a little simpler than the rest of the cast, and refers to the Talmi (Jigsaw's species) as 'kitty people'.

Adharia was the first of four Executioners selected from the cast of sixteen, after knocking out Geisha in the strength trials (and inadvertently ripping her shirt off in the process, since it had been grabbed for leverage).

Despite her resemblance, she is not related in any way to the Chakat species. (In fact, it has been repeatedly stated outside of the comic that there are no Chakat involved in the Last Res0rt 'verse -- Addy's similar appearance is only a coincidence.) 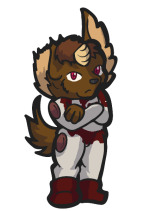 Male Kaydin volunteer. Unlike the other volunteers, Xanatos failed to gain Executioner status, and as such demonstrates the fate that the others managed to avoid — being treated as a common criminal.

Most of his right ear is missing, with some burn marks and tattered flesh as the only clue of what happened to it. White Noise referred to his injury as a "mutineer's ear", indicating that Xanatos may not have had as much choice in 'volunteering' as we have been led to believe.

Xanatos used to be a cadet in the Star Org, the same organization White Noise came from. 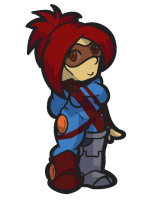 A major celebrity businesswoman, scientist, and apparent human feminist who has somehow fallen from grace, reduced to being a 'mad scientist' with a metallic leg. It's unclear what criminal connections she has, if any (although her dossier is riddled with several classified details, according to the Celigan authorities).

In spite of Jason's professed motives to kill her, she considers him little more than a sexist nuisance. 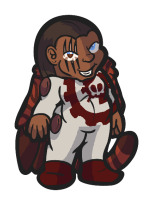 A Celeste human male, who can apparently see (and recognize at a glance) Jigsaw's 'deadness'. He has phenomenal strength. His wings are red, with crimson tiger stripes.

Arikos has an injury (hyphema) which makes him effectively blind in his right eye. According to his dossier, this was inflicted by one of his "children" after they discovered his crimes, in order to weaken his ability to utilize whatever 'powers' he may have gained.

Alice Quinn currently claims that Arikos is only on Last Resort as the result of a plea-bargain, a claim bolstered by the fact that the governments of Celigo and Nurovidia did in fact strike a deal in order to remove Arikos from legal limbo. 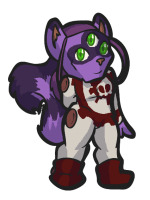 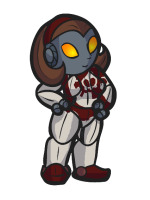 A robot 'female' who is referred to by Zodiac as a "Defective Stepford" during the demolition trials.

She is also the only autonomous robot seen in the series so far.

It's unclear what opinion she has on organic life-forms, although she did once call Silk of the Solar Winds a "Glue-Bag" after he insulted her (presumably buggy) software. 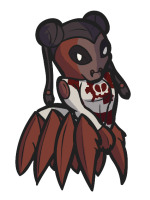 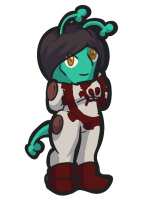 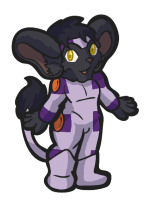 A black Talmi male. Prior to his arrest, he was a young Mafia boss whose family specialized in leather smuggling. One of his bodyguards, a Celeste Talmi nicknamed 'Candycane', had not only poisoned Slick's father, but also had framed Slick soon after his ascension into power in order to usurp his family's business.

Since his legal help since that time has been all but nonexistent, he sees Last Resort as the only escape he has left.

Slick also has some apparent history with Geisha while the two have been incarcerated. It is unclear exactly what that interaction is, except that Slick feared for his life around Geisha enough that he attempted to escape almost upon arrival at Last Resort Station. 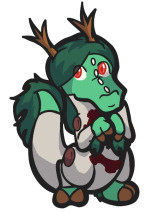 A Vidian Male with a bit of a mouth on him. 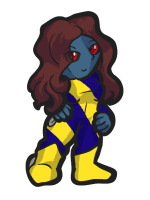 Djinn Female with dark blue skin. Chosen by Jason Spades to be his lieutenant.

She has the ability to change her skin color, hair color, and hair length at will, allowing her to 'morph' into the appearance of any other humanoid female — it's unclear if she can morph into a male yet, or if she can mimic other species besides humans.

As a Dead Inside, her eyes are black with red irises and pupils, and her transforming abilities do not appear to be able to change this.

Silk of the Solar Winds, aka 'White Noise' 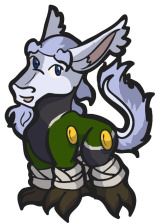 A aged white Anyr with a pale blue mane, and the second of four Executioners chosen, winning the agility trials (although Daisy Archanis would have beaten him had she not slipped at the final stage of the race).

He has referred to his crimes only as "hacking into a ship's life support" so far, having spent forty-seven years (presumably on a life sentence) for this crime. As a result, he appears to be one of the older, more mature characters in the series, and as such his pale appearance may be due to advanced age and not necessarily albinism. 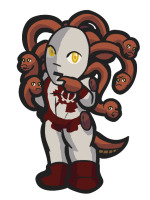 A Kendril male who is forced to wear a white, featureless mask over his main face. An apparent troublemaker with a surprisingly civilized vocabulary, Geisha often refers to his fellow players oddly, so far considering Jigsaw to be 'perfect' and Adharia as a 'canvas'. Why he pesters Slick is also a mystery.

Geisha was disqualified in the Strength trials after grabbing Adharia's jumpsuit for leverage, ripping it in the process. 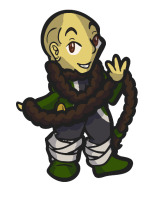 According to Alice Quinn, Qin was one half of the bargain that the Celigan Government struck in order to allow Arikos to play on the show (and Alice was the other half).

Qin claims to be a 2000-year-old vampire who chose to serve as a doctor. It was only recently that he was discovered as such while working on Celigo as Veled's physician; as such, he is under heavy surveillance to prevent from from drinking "live" blood (which might allow his vampire abilities to surface).

Vincent Vaeo
Head of V-Net, and in charge of hiring the various volunteers for Last Resort. He uses unusual hiring practices and interview tricks, and reportedly has a temper (which includes nipping at the ears of other sophonts).

Producer of Last Resort, and Vince's daughter. Cypress is also the de facto host of the show.

After being spooked by Jigsaw's 'dead eyes', she is convinced that there is something 'wrong' about Jigsaw, even if no one else believes her so far.

As one of the 'Touched', Damien claims he knows better about identifying and dealing with the strange paranormal creatures known as the Dead Inside, and hence believes that Jigsaw isn't one of them. That's not to say he isn't suspicious . . .

Atlanta
Currently unnamed in the comic, but visible in the earliest strips as Vince's secretary.

Nehine
Winged human Celeste with peacock elements. Illustrated as both a referee in comic continuity (admonishing Geisha after the criminal ripped Adharia's shirt), and also as a lawyer in the 4x4 special.

Luke Severge
Arander male in charge of the patrol party that escorted Slick and Geisha to Last Resort Station.

Cypher Forte
Jigsaw's father, seen at the start of Last Resort's series premiere at their home on planet Arael.

Meridian Forte
Jigsaw's Mother. Her hips and legs are metallic (but her tail is not), and it's not immediately clear why this is the case. Often works in a laboratory, and knows Daisy Archanis somehow.

Sudoku Forte
Cypher and Meridian's younger daughter, and the middle child of the family. A bit of a gamer, with a cynical attitude.

Slider Forte
Cypher and Meridian's son, and the baby of the family.

'Candycane'
Currently only seen in one flashback, and referred to by his nickname. Previously one of the Giovanni family's best servants, this Talmi Celeste betrayed and murdered Slick's father by poisoning him, and then arranged for Slick Giovanni's arrest (which led to his current incarceration) in order to take over the Giovanni family's leather smuggling operation back on Planet Arael.

Cinnamon
Unnamed in the comic, but also featured in Slick's flashback. One of the Giovanni family's 'dolls' and apparently Slick's girlfriend just prior to his arrest.