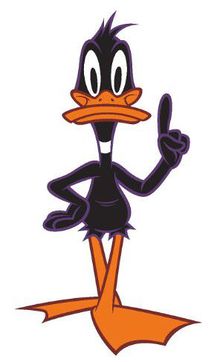 Daffy Duck is a fictional cartoon duck who is one of the principal characters in Looney Tunes. He first featured in Porky's Duck Hunt (1937), where he is depicted as a slightly anthropomorphic duck. This model would later change as the character was trimmed down and made more anthropomorphic.

Daffy was created by Tex Avery, who was responsible for several other over-the-top cartoons of the 1940's, including Screwball Squirrel. At first, Daffy was wild, hyperactive and eccentric in the traditional Tex Avery manner, and became a hit with audiences everywhere.

In the 1950's, as Bugs Bunny began to rise in fame, Chuck Jones took over Daffy's stories. Daffy was placed in parodies of existing pop culture, including 1952's Duck Dodgers[1], in which Daffy portrays the eponymous hero, a parody of space-hero Buck Rogers. These stories often featured Porky Pig as his faithful sidekick. Daffy's personality itself was remodelled into a scheming and greedy character, oftentimes jealous of the rabbit stealing his spotlight and determined to regain his old glory. This would lead him to be often cast as a fall guy for Bugs, and eventually Daffy took a turn as the villain for Speedy Gonzales in the 1970's.

Daffy has been the star of two films:

Both of these films were simply compilations of earlier cartoons with a simple plot created to connect them altogether.

Daffy also made a cameo in the movie, Who Framed Roger Rabbit, as a piano duet with Disney's Donald Duck.

Daffy also appeared in Space Jam in 1996[4] and Looney Tunes: Back in Action in 2003[5]. The latter film was also the first "cartoon" since the 1930's to portray Daffy in a sympathetic light rather than concentrate on his greedy side. Daffy's glory-seeking is explained in one scene, where he complains that he works tirelessly and still fails to achieve what Bugs does without even trying.[6]

Daffy's Duck Dodgers role, having achieved a popular following, was eventually turned into a series in 2003, and ran for three series in over two years[7]. Bugs Bunny did not appear in the film, but the series did include a number of cameos by various other Looney Tunes characters.