DSV Nautica is the name of a fictional spaceship, and the comic based around its crew.

Ideally a communal comic archive, centered around the Deep Space Vessel - "Nautica". Originally the idea being that artists can create their own sci-fi situations upon a vessel of massive complexity and size; free to modify their own piece of Nautica into whatever they want. In actuality there has been little additional material added to the DSV Nautica universe besides the work provided by creator Rei Vegan. Notable contributions include side-story comic Operation: Little Lighthouse (incomplete) by Neon (a.k.a. Phosphor), and a couple of fan-fiction stories. The comic itself is rated NC-17, and is not suitable for viewers under the legal age limit.

Most discussions for the comic as well as teasers for upcoming projects can be found at the DSV Nautica Yahoo Group.

The Yahoo group for fans of DSV Nautica has been shut down and replaced with the following site. The DSV Nautica Galactic Network forums. 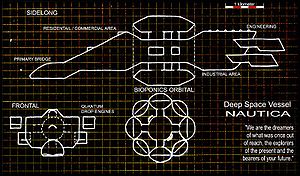 Schematic view of the Nautica

Nautica was commissioned 242 cycles ago. While that may seem like a long time for a space ship to be floating around the cosmos, there are some ships still in commission more than a millennia old. Comparatively, Nautica is state-of-the-art.

DSVs muck about the outer rim of explored space, skimming the fringes, charting as they cruise through nebula's, asteroid fields, and through singularities (the main form of FTL transportation). Why are they so big? The first DSVs were tiny in comparison; crews in the hundreds. Those first fumbling steps taught designers that space isn't really all that different from any given biosphere; the bigger you are, the easier it is to get by.

It's been approximately 1500 years since the dawning of extra-solar exploration in the advent of Faster than Light travel. 1400 years since the first DSV. In that time the size of the vessels has increased 100 fold; a typical Deep Space Vessel compliments 50,000 occupants, but this can vary depending on it's location, and missions. Nautica's current population is around 23,000. The ships large size causes it's own biosphere. Permanent denizens mix with stragglers, and runabouts. Merchants and businessmen walk the same corridors, while the poor beg for scraps. There is law on Nautica, and it's harsh - few commit serious crime, as the punishment for such things is exile on the nearest 'inhabitable' planet; or worse, death in an airlock. Fortunately, captain Neesah has never had to enact such a severe reprimand in her 40 years of command.