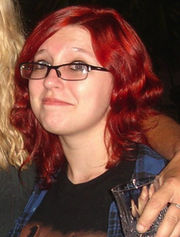 Culpeo first joined the fandom in June 2009, but had been interested in anthropomorphic animals since she was young. She chose the name "Culpeo" when she was twelve years old, originally designing her fursona as a brown male wolf with a red mohawk. Culpeo attends The Prancing Skiltaire monthly parties, where she made her first appearance in March, 2011. On March 8, 2012, Culpeo started dating Jaggy.

On September 9, 2012, during its fourth season, Culpeo became a cast member of The Raccoon's Den web show[3], and became its co-host in season five. But, shortly into the sixth season, Culpeo was replaced by Ninja (Maddy Davis) when she supposedly departed from the group after making "disparaging comments" about the show. She is seemingly excluded from "Pawsome!", the show's recently launched podcast which had advertised to reunite old and current cast members from the series[4], but made a guest appearance in the show's 81st episode "A Furry Christmas" to show she had made amends with the group[5].

Culpeo's fursona is a male Maned wolf/Grey wolf hybrid which she created in late 2007.

The second was also built by Zero Mutt, and was delivered and debuted at Further Confusion 2013.[7]

Culpeo appeared in a segment of the episode Animal Obsessed on the television talk show Dr. Phil, on March 25, 2014,[8] which pitted her versus her mother, Lori, for the mother's belief that "(she was) putting her life on hold to attend 'furry' conventions" and her involvement with furry fandom in general, which Culpeo asserted with that the fandom "It's a hobby. This isn't my life."