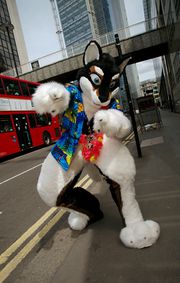 Cueball at the LondonFur Summer Party 2010

Cueball (born in May 1992) is a British fursuiter whose character is a Shiba Inu. Discovering the fandom in 2008 through VCL he quickly became involved in the LondonFurs community. After a few months of finding his way in the fandom he commissioned a fursuit by Arend Studios.

Originally from Bristol near Somerset on the west coast of the UK, he is a telecoms engineer.

Cueball is also a 1st Degree Blackbelt in Karate

Starting in early 2009, Cueball discovered the LondonFurs community and became a regular attendee to Its meets and events. Attending all major events with LondonFurs (making sure to bring the fursuit as always!). He attended BristolFur meets on occasion, prefering BathFurs as a community whilst he lived on the west coast of the UK.

Cueball attended his first convention in 2010 at Eurofurence 16 (winning the Fursuit games with teammate Ravell), returning for Eurofurence 17 and Eurofurence 18. He has also attended ConFuzzled.

Cueball is a great supporter of charity work, raising money for various charities such as MND and co-hosting a charity show at Eurofurence 17 with PinkyFennec, Tygs and JustSomeDog. Helping to raise an extra thousand euros towards the con charity total.