A crux is a species created by Malluch on Second Life. Most information regarding the species was once all surmised by the fans, as the creator left very little information herself. But more info has been obtained since 2015. Currently, the crux community is handled by members which have no ties with the team that worked on the crux originally. On July 1st 2020 after an average of two years of polishing and work, CERBERUS[1] released a new refresh of the Crux heavily inspired by the V2's proportions and features, practically giving a new lease on life for this sought-after avatar on Second Life.

Biology of the Crux species[edit]

Typically, a crux, or Latin for "cross", is considered a mutant hybrid created from several species through magical accident or scientific experimentation. They are typically bipedal and sentient, have large ears, unusual fur patterns, and a tendency to affix accessories to their tails. When walking they tend to swing their bodies in an exaggerated gait, and when running they lope forwards with long strides. They have large, sharp teeth and claws, and tend to be very lean. They tend to be very canine in appearance, with long tails, large, curved ears, and large, often unusually colored eyes. Most, though not all cruxes are striped or have otherwise complex markings on their bodies, whether it be natural or a result of whatever created them.

It is unknown what the internal structure of a crux is like, though the best possible guess is that it is closest to that of mammals, as most of the rest of their body appears to share many mammalian traits, though this could depend on what backstory is used to explain the creation of the hybrid; mechanical means, experimentation, or magic. It is entirely possible that they may have extra or differently-functioning organs or structure, and be nearly alien to the norms for most species.

The most prevailing trends for members of the crux species are body-alteration, cybernetic implants, shackles, and insanity. While the story behind the species is very much lacking, A basic lore was constructed during the time the concept advanced further in the V2 wave. Those became more clear and explained during a conversation which was noted in the part of June 2016.

Crux was depicted by the creator as having no specific gender. Whether this means crux themselves have no gender, or they were simply drawn androgynous was not specified. (Malluch's Crux vendor inside Second life will tell you "This is a genderless Avatar" if you try to obtain a female one.) Most assume this was intentionally left open for fans of the fictitious species, however many crux tend to remain genderless. Whereas this became more of a strict guideline, it never was meant to be such. A small moment was taken to ask for explanations, Malluch went clear on the facts during January 2016 that it was something for everyone to work with and make the gender of your own choice.

The crux who do have genitalia do not identify with a specific species buildup. Mutations alter many internal processes and it may be hard to identify those with genitalia between male and female because of the shapes and makeup of their specific organs. Such mutations make it nearly impossible to reproduce sexually, as the internal makeup may not allow for any development of a fetus/fertile egg or even the proper formation of sperm or eggs.

Some crux has both male and female reproductive organs that seem fully functional. This, however, is not always the case. Remember that a crux does not conform to anyone species standard in terms of appearance, sexuality, gender, and reproductive organs. Each crux is different and still, little is known about their diversity.

Crux comes in various types distinguishable by the coloring of their fur and markings, these changed over the time between the different versions of the Crux Avatars being released in Second Life. There is some belief amongst some members of the Crux community that the different color types represent different attitudes or emotions of that particular Crux type, though this has never been officially confirmed by the creator of the species. A notecard have been doing the rounds within SL, it appears to also be describable as multiple language were used to figure the base names out:

Each crux usually carry a symbol of their own or from the original line. Most depicted are kabbalistic symbols or ones originating from alchemy. Although the correlation with the occult, black magick, dark alchemy is disputed and viewed differently in each group. It has been a way to help most members to base their crux character's backstory/lore. Some crux will also chose to not bear any ties to said symbols.

A group of researchers had stumbled across a great finding, one of which consisted of an old grimorium. Several studies were made on it and the group deemed some of the experiences to be unethical or just plain morbid to gather the materials required for the experiment to take place. Although unspecified, a place had to be chosen for it to be a happening. A morgue from an abandoned asylum was chosen to conduct the experiment. In order to create for this to be a creature and not a failed experiment, they had to gather pieces of fresh(if possible) corpses, animal or human, its to build a vessel that will carry the entity known as the "crux". specified in the grimorium to be an entity that exists in a different plane of reality that has to find its way to "cross" ours. mutation would then be applied to the vessel to obtain the desired result. Whilst the experiment could have gone very wrong it was then accomplished. the researchers drew much enthusiasm into studying the new creature. key characteristics that made them fascinated was the fact that the creature, the crux was a rapid learner and was very innocent upon first moments of summoning. it was rumored that some of who made this experiment successful, began to use their own selves as a vessel to bring the entity to this reality. Where a crossing of the mind of both entity and person would be not mixing all that well. Some say it is where the "crux" built for themselves the vice and lesser virtue of the personality traits as it digs in the deepest corners of one's mind.

The part that ties all Lore Together[edit]

Since the crux is then found to be an entity that is summoned in a vessel then made into who it becomes based on their surroundings at first reach, it causes for the crux to be quite diverse in the psyche and knowledge grasping period. Quick learners as mentioned, makes for them to evolve fast. they deal well with the sciences of many kinds. Making the reason for modifying oneself very valid. It is a "crossing" of all kinds of great ideas that can be implemented, for example, the way its fiction in the lore is that the grimorium is aged and could be explaining why some crux identifies with very different time periods. It also means for it to come from other corners of the universe to be making sense, as they are like "dominoes waiting to fall" into a variety of places, time periods. In the end, not all crux end up the same, the insanity trait tied to it is based upon the basic lore that was exchanged in June 2016. with the respect that some feel a bit broken, it is very fitting to find oneself loving this species.

The crux community has gone through several waves of popularity. Active both Online and real-life in furry conventions, many have their own fursuit. As stated previously the community is not creator-directed/moderated, the community is formed of several small groups. How to reach one or more of them will be up to the viewer to make their researches. In respect to not giving out names or singling out any groups, no links will be provided to make searching easier. Some groups are either disbanded or defunct. A lesser-known fact about the crux, a large group of crux is called an "asylum of crux". 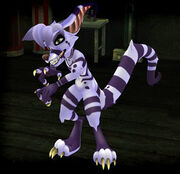 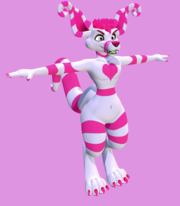 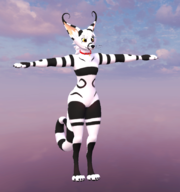 There are currently 3 types of avatars available for VRChat. These avatars have different styles and features.

This version contains expressions and animations for both VRC for versions 2.0 and 3.0. This avatar uses Poiyomi Toon Shader. The file includes the Unity file, .Blender, and the PSD for texturing. The file DOES NOT include Dynamic Bones. Dynamic bones can be found on the Unity Marketplace.

This is more of a slim avatar more traditional Second Life style with the color patterns. This avatar is currently 3.0 with a Simple Cel Shader. The file includes 19 texture options, .Blender, Unity, and Dynamic Bones.

Spaghet aka Spagy released a crux model, based on his Leggy in March 2021. It´s a SDK 3.0 Avatar, which requires the purchase of the dynamic bones package. The shader is a Markcreator.