Note: "Critters" is also the former title of the comic strip Bunny Mischief by S'Zero Alaris. 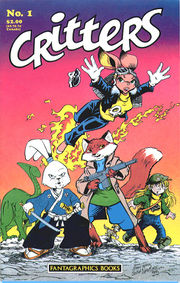 Critters was a furry anthology comic book published by Fantagraphics Books from 1985 to 1990 under the editorship of Kim Thompson.

Prior to Furrlough and Genus, this series was the longest running furry anthology comic book series. Furthermore, it served as the flagship title of Fantagraphics' line of furry series in the 1980s.

The last 12 issues were switched to revolving features of issue-long stories, rather than the anthology format. Declining sales led to this title's cancellation.

The series included in the book were:

Writings on the rise and fall of Critters: