From WikiFur, the furry encyclopedia.
Jump to: navigation, search
Community > People > CrimsonTyger
CrimsonTyger is the furry name of Jonathan Bright. 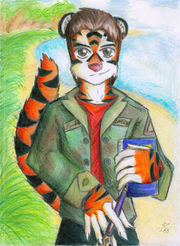 Jonathan Bright is the face behind CrimsonTyger. As of 2009 is a student at the JVS. Living with his mom and sister he mainly does not do much except converse with the fandom members around his age. Other things that interest him is paintball, video games, and writing. Jonathan is known as a furryjuggalo. Which is a furry who listens to music by Psychopathic Records, like Insane Clown Posse, Boondox, Twiztid, and more. Loves to wear dog collars, black t-shirts, baggy jeans, and hats. Major video game addict as well, loves series like, Resident Evil, Silent Hill, and Halo.

Jonathan was born on October 14, 1992. Unfortunately his father abandoned him when he was a baby. On December 3, 2010 Jonathan Found out that his father had passed away in October. Was raised by a stepfather, who had a child with his mom giving him a half sister. At the age of 9 he became fascinated with firearms. (Mainly the AK-47) This interest still has his attention even to this day. At age 12 while surfing the web he came across pics of humanoid animals called "furries." Upon seeing these he researched the fandom and became a member. Lives with his mother and half sister.

CrimsonTyger like the name suggests is a tiger species furry. He has orange fur with black stripes, brown hair, a semi-long bushy tail (due to his mother being a fox species), tall, skinny, white under belly. Like Jonathan he is very nice and caring, but has a crazy side, since he is a juggalo. Likes to usually wear camo, and has an old camo jacket from a past relationship and has the sleaves cut off. Usually enjoys things from hot topic, but will sometimes rock some preppy clothes. Loves to wear tripp pants and black tight t-shirts mostly.

Starting on December 5, 2010 Jonathan decided to start progress on a techno album titled Techno For The Happily Insane where he goes of course under the name of his fursona CrimsonTyger. His stylings coming from electronic beats, tones that range from Trance to Dance, his beats are mostly happy and relaxing, and sometimes will deliver this in a Schizophrenic kind of way. Any tracks that have been completed already can be found on his BandCamp www.crimsontyger.bandcamp.com, and all his music is free as he was quoted when saying "I don't believe in charging people for my music, I just want to be heard and for people to have a good time listening." News of when the full album will be finished has not been announced, but he has guarunteed that a new track will be released at least once a week until the album is finished. Also is planning on going into a side project with his mate Ivory, who is a white tiger that lives in ohio, and the album is planned to be called When Light And Dark Collide! No release date has been announced for this album either.

Facebook under Jon Bright and Fur Affinity under the name CrimsonTyger.