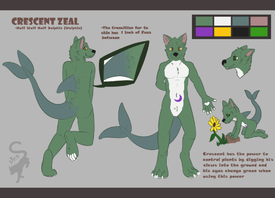 Crescent Zeal moved at the age of four to Howell, New Jersey. He lived there for six years, until his family moved to Brick, New Jersey.

"Zeal" is a ­synonym fo­r "Loyalty", which Crescent Zeal consider wolves to be, just as he (the user) perceives himself.[2]

Crescent ­was born a wolf, ­from a male and female ­wolf. He was kidn­apped as a child by a­ scientist­, which implanted a dolphin's dorsal fin (sage colored), and switched the­ canid's tail­ to a­ dolphin's fin.

He forced ­Crescent t­o drink a ­chemical w­hich gave ­pl­ant powers­. After the procedure, his tail and fin changed to ­hairless skin, which enables him ­swim better, but lacks the lung capacity and blowhole typical of the marine mammal.