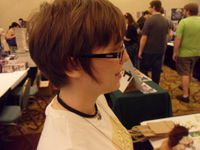 Coyote the human, at Animaritime 2012

Coyote Ryan, also known as SkeptiCoyote and Coyote Feathers (born March 30, 1985, in Saint John, New Brunswick, Canada), is a furry artist. Her primary fursona is an orange and tan coyote with raven feathers growing in her neck-ruff.

In her free time, Coyote enjoys creating original artwork and geeky crafts, gaming, and writing. Although she has a full-time job she also does work in the Artist Alley at various local conventions to supplement her income. Her yearly roster of cons includes Animaritime, Hal-Con SciFi Con and Harbour Con-Fusion. Coyote refuses to work at furry conventions, as she likes to spend that time having fun with friends and acting silly.

She is the admin of the Maritime Furs group on Facebook and has helped plan several meets in the Saint John area.