Convention Master is a comprehensive software package designed by CivetSolutions[1] to manage every aspect of a convention from registration, payment processing and membership badge printing, to art show bidding and dealers den management, to convention operations lost and found and asset tracking, volunteer logging, and much more. It is primarily utilized at furry conventions, however it is seeing expanded use. Development is headed by Trapa Civet. 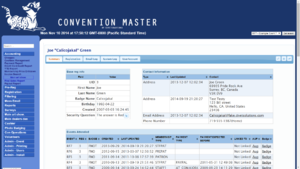 In February, 2018, a flaw in Convention Master's preregistration system was published which allows for anyone to find whether one attended a convention, and the name they used for their badge, which is often the name of a fursona. This raised concerns of coworkers, family, friends or other individuals being able to identify whether or not an individual was a furry. This prompted some conventions using Convention Master to disable access to their preregistration systems in order to preserve the privacy of their attendees.[2][3]

The posting by Sky on medium.com[4] was responded to[5] by CivetSolutions, refuting Sky's claims that they were not concerned with the issue, and stating that Sky refused to work with CivetSolutions or allow for more time before disclosing the issue publicly. Sky later updated their medium post to rebut these assertions, and allege CivetSolutions had been aware of the issue since October 2016.

CivetSolutions updated their statement on February 24th, 2018 to announce a new version of the software had been released with an option to allow for username-based logins. However, the real name login system would remain[6] for conventions who wishes to use it.