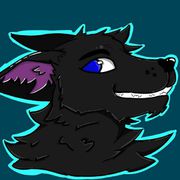 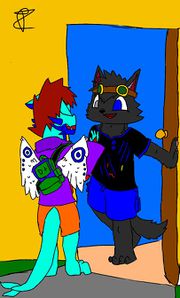 Rae with his friend Baron (art by @BaronEnd [Telegram])

Conner was first introduced to the furry community in early 2013, with his first appearance in early 2014 on Google+. In 2015 he moved to Central Arkansas, living with his father until August of 2017. There he met his two best friends, Daniel and Haley. He now lives in East Texas. The name "Roanoke" is actually a play on his name. First, he spelt his name backwards, mixing up sounds and spellings.[clarify]

Conner can currently be found on the app Telegram, where one can see him running his public group chat, @RaenokesTavern, as well as his best friends, keeping him in check and helping him out.

Raenoke Centurinus Arivat'sda, commonly addressed as just Rae ("Ray"), is a sleek, dark-grey wolf. His left ear, right eye, and tail tip are silver, his other eye being a deep blue. He is of average height and build. His clothing normally consists of blue jeans and a T-shirt, with an unbuttoned flannel over it. He also wears four titanium bracelets: one on his right arm and three on his left. He also always carries around a dark-brown leather satchel.

The "Raenoke" character has only been around since March of 2018. Previously, the character was a black wolf named David Wulinski, with no real creative attributes.

Conner is a quite uncommon character. Having ADHD (Attention Deficit Hyperactive Disorder), he can sometimes be unpredictable. He cannot always say what he truly means, either from not being able to think of what to say at that moment, or being confused by the subject or previous dialogue. This also works the same in reverse for him, sometimes not being to understand what a person is saying completely, and is known to be quick to jump to conclusions. That being said, he purely thrives on others' happiness and will do just about anything to make someone smile.

Conner is known for his kindness. If someone is upset, he will reach out to them and let them vent to him, often offering advice and suggestions. He's normally a chipper wolf, though his mood can change quickly. He can get anxious and emotional, usually because of something or someone hurting or hindering one of his friends. he can be very protective of the people he cares about and will jump at the opportunity to defend them. All of this aside, one could, on most days, find Conner very friendly and easy-going(in more ways than one).

Conner takes a heavy interest in technology, as well as aeronautics and aerospace. Air travel and space travel of any kind makes him jump for joy. He dreams of one day being a pilot and even going to space. Conner also loves books and art that depict space travel and the steampunk universe.

Rae has the ability to metal-bend. He can shape, form, morph, melt, levitate, and shoot metal at will. If it is made out of metal, he can use it in some fashion. His four titanium bracelets provide excellent material for near limitless use.