Conker's Bad Fur Day was a video game produced in 2000 by Rare for the Nintendo 64. The titular character, Conker, originally conceived as a sweet-minded squirrel became a foulmouth for this game. The game was later updated as Conker: Live and Reloaded on the Xbox with an expanded, online multiplayer mode. Both games are rated "M" by the ESRB.

In many ways, the game was a sendup of the 3d platformer genre (filled with games like Sonic Adventure and Spyro the Dragon). Conker does not decide to go out and fight; he gets his mind blown on beer one night and gets so lost, nobody's even heard of his home. His girlfriend is not only safe at home (instead of being the damsel in distress, as is typical of the genre), she is blatantly sexual (where most platformer love interests are just designed to have a 'cute factor'). The evil doctor doesn't want to defeat him; he wants to capture him so he can use his head to fix the king's coffee table. To go with this, the game is filled with parodies, mostly of movies like Terminator 2, the James Bond series, and Saving Private Ryan. 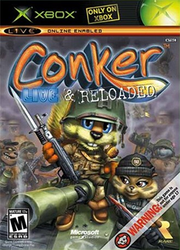 The boxart of the remake