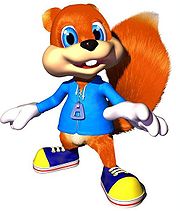 Conker is a heavy drinking, gambling, greedy squirrel. He was originally a sweet-minded squirrel in Conker's Pocket Tales, but in Conker's Bad Fur Day, he became a foul-mouth. He is voiced by Chris Seaver.

Conker originally appeared in a 1997 racing game called Diddy Kong Racing, as a playable character. His latest appearance was in the 2005 release of Conker: Live and Reloaded for the Xbox.