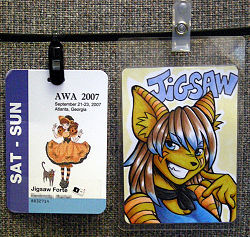 A pair of conbadges shown for comparison. At left is an official badge issued to attendees at Anime Weekend Atlanta 2007. At right is a personal, commissioned fursona badge from Angel Jules Studios drawn for Jigsaw Forte.

Con badges are personalized identification badges (usually 3" x 4" in size) that can be used to identify a fur. Con badges are called such because they are typically worn at a convention or gathering.

There are two main kinds of badges: membership or official badges, which are issued by convention hosts, and artist badges or fursona badges, which are a specialized form of commission. Most often the term "con badge" refers to the latter.

Identification badges provided by the convention itself are issued to participants as they arrive and/or register with the convention, either on-site or several months before hand. These badges are usually one of two types: a hard plastic badge similar to a credit card, or a label printed and stuck to a plastic badge pouch. They typically display a stock image of the convention's choice, perhaps drawn by a guest of honor. While badges usually display a fan name, most conventions number their badges, as names may be duplicated or withheld. In charity auctions, the badge number is generally used to identify the winner.

Official badges are usually needed to get into certain areas of the convention (such as the dealer's room, artist's alley, and the art show), or to convention space in general. They are valuable, and subject to counterfeiting or badge swapping by ghosts, though those who do so risk convention and hotel bans if discovered. Typically each badge is only good for admission to a specific convention year, although attendees often collect them for sentimental value and/or bragging rights.

Some conventions will issue different styles of badges for varying attendance criteria, including: sponsors, convention staff, dealers, artists, minors, or one-day attendees. Conventions may also mark some of these types with a ribbon, text on a printed badge, or other identifying mark. At times black marks are given to badges when attendees are observed violating the convention's standards of conduct.

Art commissions designed to be worn by their clients are artist badges or fursona badges. These badges can be worn at many different conventions or meets. Primarily used for identifying furs known online in real life, they are intended to be easier to recognize than an official badge due to the use of a personal image.

While standards for these badges are left up to the individual artist, a typical badge:

Since they are intended to be worn, fursona badges commonly have the artwork either laminated, or placed in a clear badge pouch. This is to prevent casual damage or bending of the artwork. If a person is commonly represented by several characters, they may wear badges for each of them.

Many artists will deviate from the norm to accommodate the needs of certain clients - such as larger badges designed to be worn with an elaborate costume like a fursuit for higher visibility - or as a 'gimmick' to either make their badges stand out among others and drum up sales by offering a unique format. 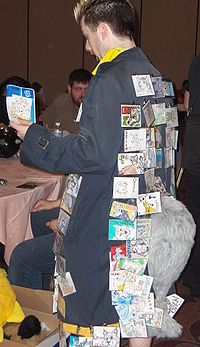 Some furs collect multiple badges of their character and spend a great deal of time and money to obtain new and interesting badges, making badges an easy source of revenue for artists.

If a person wants to commission a personalized badge from an artist, they can usually find willing artists available in the Artist's Alley or Dealer's Room at a convention, or through online commissions and auctions. Several artists have auctions in the months prior to a particular convention as a means of funding their trip, and then distribute the badges to their clients at the convention itself.

There are also exchange communities where people can trade badges with each other, sometimes as often as once a month depending on each community. Most of these communities expect badges to be completed in a timely manner, and often don't give artists the chance to specify whose character they would like to draw (or vice versa).