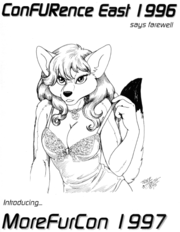 The cover of the ConFurence East 1996 conbook.

Art show sales increased over the previous year to $12,400 from 596 pieces of art. Attendance estimates again ranged widely from 500 (according to the Yarf! Chronology of Furry Fandom by Fred Patten) to 1,100 (according to the Anthro Fandom Convention Infosheet by Flint Otterhall).