ConFurence East 1995 was first run of the ConFurence East series that was held October 13-15 at the Holiday Inn Jetport in Elizabeth, New Jersey near the Newark International Airport.[1] It had evolved from Furtasticon, which had been organized in 1994 by Trish Ny, the con chair. 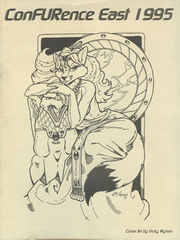 The cover of the ConFurence East 1995 conbook.

The "program book wasn’t about the con per se, but rather a who’s-who of furry artists/creators at the time".[4]