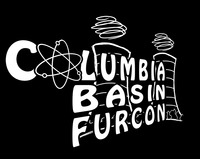 Columbia Basin Fur Con was a proposed furry convention that was expected to take place in eastern Washington, USA.

As of September 2015, no dates or location were announced, but the first occurrence was being planned for 2017 in the Tri-Cities area. In March 2015, NaoShadowpaws posted on Twitter "So #CBFC isn't until 2017. This is due to a lack of resources needed to pull it off for 2016."[1]

In May 2016, the official website stated "The Board hasn't established a date for CBFC just yet. We need to find a suitable venue first, and then find a weekend, most likely in March, that works for that venue. We are still in the very early planning stage.",[4] By May 2017 the website was defunct.