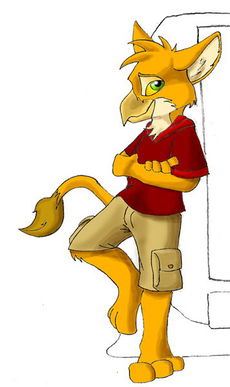 Cody Rush, formerly known as Gravis, currently lives in Savannah, Georgia. His condo, Featherhall, is located downtown near SCAD facilities and is one of two locations commonly used as a meeting place for the Savannah Furs. 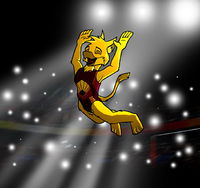 Cody is portrayed as a wingless gryphon who is either short for his age or a younger character, though his age is not clearly specified and has been known to change depending on the situation. His colors are gold and tan.

His character is usually a rebellious teen, a wannabe surfer and an aspiring professional driver.

Cody has attended many cons as a sponsor or super-sponsor, including Anthrocon, Furry Weekend Atlanta and Pawpet Megaplex.

Cody has been a long-time member of the babyfur community, and his previous alias Gravis had become a well-known and recognized name in many babyfur circles due to his small size, special-interest artwork, and photographic internet presence.

At Anthrocon 2003, Cody (at the time Gravis) proposed to Arty aka Snap the Bat via 2 the Ranting Gryphon's comedy show. 2 concluded his show with a series of announcements, ending with a final note and popping the question as a ring was presented to Arty, who accepted the proposal.

Cody (as Gravis) was for several years the proud and loyal pet of 2 the Ranting Gryphon. This was not a romantic relationship and spanned the course of several partners for both of them.