ClosedGate is a webcomic created by Santiago Sánchez. Launched in 2010, it is a story-driven webcomic about the adventures of a runaway slave in the Continental Union, who tries to uncover the truth about the colonization of his island and his missing father.

At the dawn of a New Age, the Union is conquering the South Islands one by one. During the Union invasion to his hometown at the island of Terranova, Christopher is shot and presumably killed. To his surprise, he wakes up alive, with the invasion gone and his father missing. Two years later, he escapes to Santa Lucia, capital of the growing Union, to learn about his father's disappearance and the Union's real intentions. On arrival, a chain of events leads him to live with Roselle Campbell, a top-ranking officer of the Union's military. 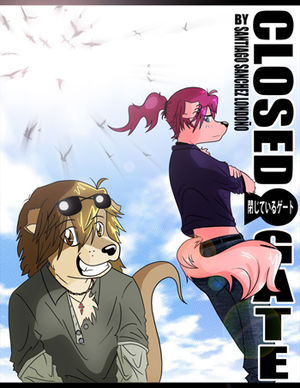 The main characters from ClosedGate, from left to right: Christopher, Roselle

A river otter, whose island was conquered by the Union and was made a slave. Apparently, he has a special aura that draws the attention of people around him, including the Union. He is naive and credulous, but on top of everything he is extremely loyal

Roselle: She's the Jerk with a Heart of Gold who, along with Paolo and Henry, is part of SPD Seven, seventh ranked division of the Special Protection Department, a branch of the Union's military.

A fox who works along with Roselle and Henry to form SPD Seven. He has a cheerful personality that often clashes with Rose's coldness.

Henry is an albino alligator who works with Roselle and Paolo to form SPD Seven. He also runs a bar, which most characters frequent. He's usually the Voice of Wisdom for the reckless Rose and the naive Chris.

Eve is an andalusian hound, part of SPD Two and head physician of the Special Protection Department

A blue gryphon who was born wingless, he is along with Evelynn part on SPD Two. he also appears to be Rose's love interest, but his feelings toward her are unknown

Along with Ursoa and Storm One, she forms SPD One, the highest ranked division of the Specian Protection Department. She is the Chief Of the Special Investigation department and she is very interested about Chris' unusual Aural Wavelength

The Continental who helped Christopher escape Terranova. He was last seen in a conversation with a living shadow, who he refers to as "Samael"