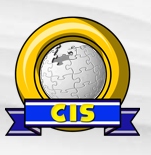 Cisoclopedy (also known as CIS encyclopedia and Sonic CIS) was designed to be an encyclopedia based on the wiki system where users can cover Sonic the Hedgehog and Russian-speaking fandom related topics in Russian. Cisoclopedy was created in April 2007 and as for February 2008 consists of about 400 articles which covers community related events, memes and personalities (many of them tied to Russian furry community).