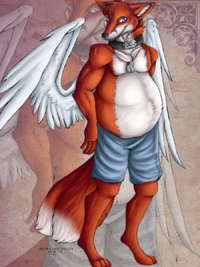 Kitmyth is depicted as being a 665lb red and white fox with two tails, and a pair of wings. He is born of both angels and demons, the former being the origin of his wings, and the latter the source of his considerable weight. He is frequently shown wearing a collar and a pair of dog tags.

The character, sans wings and weight, appeared in Eon's Comic (a Sonic-based webcomic) before being killed off on November 15, 2008. However, the character was revived on May 1, 2010, complete with his new set of wings.