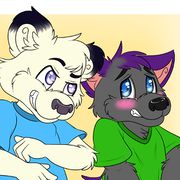 Chris with his mate Darkmane Arweinydd

Chris is a babyfur, and furry fan from Wylie, Texas. He is currently 13 years old and has a wolf sona who is in control of time. (Therefore being able to manipulate it... and change events)

Chris' Sona is a Shadow God.

Chris Shadow Hunter is a 3 year old cub, but how did he come to be? I mean he's magic, can talk and think like a 14 year old! Well it’s simple! He was born out of shadows! His mom and dad were too! That's why they’re related! Chris’ parents were driving to the store one rainy day and saw a little kitty under a bench, Cold, wet, afraid, alone…They pulled over and pulled him in the car and dried him off. He said his name is Dakota...he thinks, but that they can call him Koda.

Over the years Chris has learned that being a shadow comes with it's perks, like magical powers including Shadow morphing, Rages, Immunity to Fire, Ice and Electricity, and even the occasional Ultimate Rage! He also is in control of time (therefore he can manipulate it and change events). He has a collection of 50 Switchblades, he has been collecting them for over 4 years.

His jacket is a key factor to meeting his best friend, Darkmane, Chris was walking down the street and he saw a little lion sitting on the side of the road, it was about 24 degrees fahrenheit, so the lion was shivering like crazy! Chris decided to let the lion use his jacket, because Chris LOVES the cold, he loves when cold winds blow through his fur, he likes the nice cold feeling on his fur around winter time! Dark explained he didn't have a family and Chris’ parents took him in to take care of him.

Chris’ earrings are the weirdest features of him, They literally came from nowhere. He was born with them on. So thats pretty cool.

Chris can change his age, forgot to say that, he just closes his eyes and thinks of a person, and an age. Bam age change.

His eyes can change color based on his mood. No he wasn't born with them but the backstory of these are pretty dark. He was walking around when he got jumped and they just gouged his eyes out. No reason, maybe it was fate.

Throughout his life, Chris was a sneaky little pup, he was always playing pranks, getting in trouble, not doing what he's told. Dark came around and stopped that though, He was more calm and not a little butt like Chris. When he was about 15 and Dark was 16, They got drafted into the war against mars. Dark got cybernetic arm implants and Chris got eye and paw implants so he can shoot electricity out of his eyes and fire and ice out of his paws. Chris was a sniper in the war, yet killed the most. Once Dark kills the leader of mars (his former parents) Him and Chris are declared heros! They move into a house together with a couple friends and become roomates!! SLEEPOVERS FOR DAAAAAYS!!!! They live in peace, adopt some cubs, watch netflix, quickscope on COD, until they are called back to war

Last but not least his name! He got the name Chris Shadow Hunter by: Choosing his first name, being a Shadow, and being a Hunter (wolf, murder)