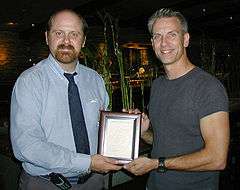 Sanders is best known for creating Disney's animated feature film Lilo & Stitch, which he wrote and directed alongside Dean DeBlois, as well as co-writing and co-directing the first How to Train Your Dragon film (also alongside DeBlois, who later wrote and directed both sequels himself). He famously starred in the title role of Stitch in the former film, a role he continued to play in the sequel films, Lilo & Stitch: The Series (but not the later shows Stitch! or Stitch & Ai, both of which were produced after he left The Walt Disney Company), and various other Disney projects.

Sanders has old ties with the furry fandom, including being a former member of Rowrbrazzle, and illustrating furry media such publications as MU Press's Beauty of the Beasts.