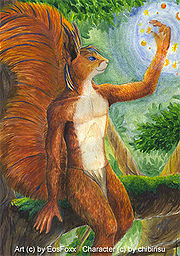 Chibirisu is active in the German-speaking furry fandom since 2003. However, he already got familiar with the US-Fandom via Internet in 1995. Chibirisu is the founder and owner of the Frankfurs Community, dealing with the furry community around Frankfurt in Germany. Thus, he is also the host of regular housecons in spring and autumn.

Freetime activities of chibirisu include music, as he had his first contact with the piano at the age of 5 and took piano lessons througout 20 years. He also deals with photography and photo-, audio- & video editing.

He is interested in: Music, animated films, SciFi, fantasy, IT, astrophysics, photograph, psychology.

The nickname chibirisu is japanese and means "small squirrel". The initial is written with small letter. Most of his friends call him by his official short-form "chibi".

Twice a year he organises a Furmeet in his flat with 20-30 people (regular in spring and autumn). He also organises occasional meetings within the scope of the local community "Frankfurs", who is primarily managed by him.