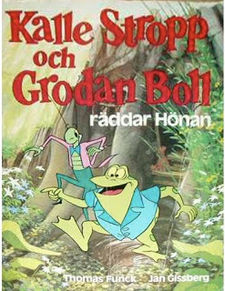 It was followed in 1991 by the feature-length film Charlie Strap and Froggy Ball Flying High, made by the same team in the same style.

One day Charlie Strap's good friend The Hen is kidnapped by two crooks called Pudding and Kalson. Charlie Strap, who has just been invited by Froggy Ball to participate in the virgin ride of his new car, constructed by Plåt-Niklas and himself mainly out of an old shoe and a well-shaken soda bottle, begins the chase. But the start is miserable as their other friend The Parrot also ends up being kidnapped.

It turns out, though, that the kidnappers might not be purely evil after all: they work as stage magicians and just happen to need a hen for a trick they are performing. Charlie Strap and the others continue to chase the kidnappers through air, on the ground and on water skis until the final showndown. Maybe they can find another trick.