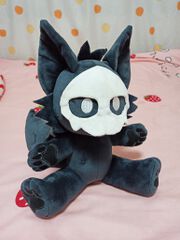 Changed is an independent action puzzle game created by Dragon Snow (Chinese:兽屋之龙), released on Steam on 4 April, 2018. An English-language version became available 13 May, 2018.[1] As of 23 October, 2020, the game holds an aggregate review score of "Very Positive", based on 2,948 user ratings.[1] In Changed, the player takes control of Colin, a human who wakes up in a strange laboratory filled with latex creatures and learns that most of humanity was wiped out by a plague.

Colin wakes up in an unfamiliar room after waking up, unaware of how long he's been asleep. Confused and scared, he starts to make his way out of the facility, avoiding unfamiliar creatures made of latex. If caught by the creatures, they either absorb him or turn him into one of their kind. Colin encounters a latex dragon who answers his questions, informing him about a viral plague that hit humanity, rendering them nearly extinct. From there, Colin reaches a library and meets Puro, a cheerful latex wolf that helps him. Colin can choose whether to treat Puro with kindness, affecting which of several endings the player achieves.

Colin is temporary separated from Puro in a generator room, where he reads with disbelief that he had been in a coma for five years. When Puro catches up to him, he tells Colin that he needs a host to survive. If Colin was sufficiently kind to him, Puro will continue to travel with him, but if not (or if the game is played on the "Easy" difficulty), he attacks Colin and assimilates him as his host.

The pair encounter a scientist named Dr. K. Dr. K was once a human, but he voluntarily transformed himself into a white latex wolf. The scientist captures Colin, insisting he not leave because the human may be infected with the virus and cause a new outbreak if he does. After escaping the room he was trapped in, Colin goes to confront Dr. K. again. If Puro was treated insufficiently kind, he is dead, and Dr. K overpowers Colin, using him as a test subject for experiments. Otherwise, Colin finds both Puro and Dr. K unconscious, with Puro waking first and explaining that the two had fought.

If Colin decides to escape from the facility despite the scientist's warnings, Puro leaves with him, but he soon falls ill and dies from the virus.

If Colin decides to stay, but was not nice enough to Puro, Puro leaves without him. He promises to keep in touch, but when he falls out of contact, it's implied he died without a host.

If Colin is indecisive and was nice enough to Puro, Dr. K performs a procedure that transforms Colin into a white wolf. He also provides Puro with a robotic host, allowing him to survive without absorbing anyone. The pair are able to leave safely, while Dr. K remains in his lab.