This article is about the mythological species. For the former wizard of FurryMUCK, see Centaur. 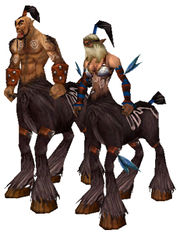 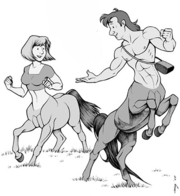 The cast of Accidental Centaurs

A Centaur is a creature from Greek mythology, generally portrayed as a being with the full body of a large horse with the upper torso, arms and head of a human located approximately where the horse's head should have been. They were considered barbarians, but certain centaurs, notably Chiron were viewed as divinely wise. Some earlier images of centaurs show them with four human legs rather than the horse body.

The etymology of centaur (also known as Hippocentaur) comes from ken – tauros, possibly "piercing bull-stickers" or "bull-slayer", the same tauros as in Minotaur, "bull of Minos". The name Centaur is thus not descriptive of the creatures shape, but rather its function (slaying bulls). The use of "taur" to mean "a creature having a humanoid torso adjoining a quadrupedal body" can therefore be confusing, more so as "taur" means "bull" in some languages.

Some bestiaries referred to a half-human, half-donkey creature called an "Onocentaur".[citation needed]

There are few mythological tales of female centaurs, this may be because the myths make them out to be all males, but biologically it could be due to the fact that female centaurs may lack upper body breasts (despite how they are often shown in art) and so mistaken for males. [citation needed] There are other centaurs found in different cultures.

In anthropomorphic or furry fandom, there are many variant types of centaur, often with greater or lesser amounts of animalistic appearance. For instance some have the upper bodies of humans but the lower bodies of foxes, lions or even spiders. In this case, centaur becomes a more generalized term referring to a usually hexapedal creature possesed (usually) of two manipulative appendages and four locomotive limbs, though even this can vary significantly, such as in the case of a spider centaur, which could have eight lower limbs.