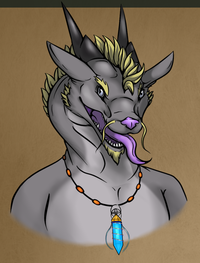 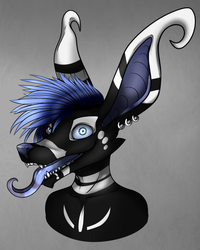 Celsheva Shinral, also known as Celshin (born in 1991), is a fursuiter who lives in Stendal, Saxony-Anhalt, Germany.[1]

Celshin himself has 2 fursonas. One is a eastern dragon the other one is a crux.

He has a slim and tall body build, though a bit muscular.

His fur is grey, he has lighter belly fur and blond hair which turns into a mane along his back which extends to his tailtip. His eyes are blue, but can change to a bright red color in certain situations. The flesh has a violet color.

He also has piercings in each of the ears and is always wearing a necklace with a blue crystal. [2]

He has a normal crux-like body build, maybe a bit taller than most crux.

His fur is black and has white stripes and markings. His hair consists of a big blueish mane. His eyes have a ice blue color. The flesh is blueish colored.

He has got piercings in each of the ears and is also always wearing a necklace with a blue crystal. Besides that he is always carrying some kind of weapons, so be careful. Appears to be aggressive sometimes, but is rather a bit cracked up. [3] 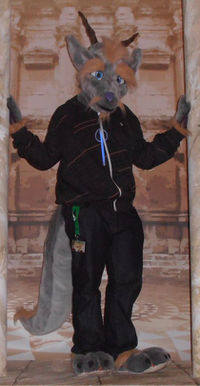 Celsheva has a fursuit of his eastern dragon character, it was constructed by Sethaa and debuted at Eurofurence 18.[4]

His name in Second Life is "Celshin Skizm" and has no display name. Most of the times he was found around his stargate-themed spaceship "Twilight Destiny". It had a working gate with the address "Twilight Destiny" aka "Todesschnitzel". Since the discontinuation of the development and support of working stargates in Second Life, the spaceship has been taken down as well. Partial support of the stargate system was continued later though, but the spaceship won't return. The current address is "The Cruxhole", a tropical themed island. [5]