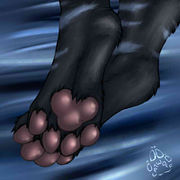 Catwolf (also known as Bombchu or Kurosa) is a furry artist with Austrian heritage. She started creating furry art in November 2006, and for the five years prior to that drew anime-style art. She currently publishes mostly commissioned artwork of all kinds of themes. Catwolf's art has been featured in the Furoticon and Fur Pile trading card games.

Example of style and texture

Catwolf's fursona is called Luucy, and is a hybrid between an fox and a mink. Her body is mostly blue, with darker arms and legs and white fingertips[1]. Her hair has a red hue similar to that of red wine.