This article refers to the musical, Cats. For information about the animal, please see Cat. 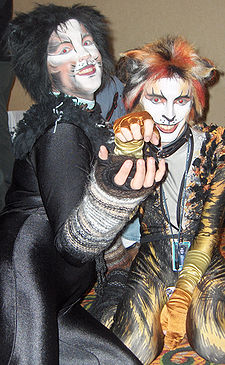 Cats is the title of a musical written by Andrew Lloyd Webber, based on the poetry collection Old Possum's Book of Practical Cats by T. S. Eliot, which for a time held the record for the longest running performance on Broadway (the current record-holder is another Andrew Lloyd Webber musical, The Phantom of the Opera) .

Fans of the musical overlap somewhat into the fandom, and to a relatively small extent, costumes based on or styled after those in the musical can be found at conventions, Halloween parties, and the like. Such fans, however, are somewhat ubiquitous, as there is seemingly only a slight overlap; not all furs are fans of the musical or the costumes, and rarely do Cats fans necessarily identify as furs.

The costumes generally attempt to mimic those present in the musical as best as possible, usually including a unitard that is hand painted using fabric paints to look like a certain character, cat ears or a modified faux fur wig, a tail made of yarn or a feather boa attached to a belt of looped yarn, knitted arm warmers or gloves, leg warmers, and additional accents on the shoulders of the unitard meant to look like fur. The actors also apply detailed makeup often using similar patterns used in the musical.

Cats the Musical however, is a dance based show. The simple clothing is help to the classical type of dancing found in the musical. The actors pretend to be cats in their movements and acting, as well as following the lines of poems by T.S. Eliot's Old Possum's Book of Practical Cats, on which the musical is based. The actors require great flexibility and stamina for a single show and are therefor most of the time, professional dancers, singers and actors. The musical is PG, contrary to popular belief or representation through the fur fandom.

The style of costume has extended to other phenotypes and does not restrict itself strictly to felines. Shadow Vixen, for instance, has styled a fox that is based more or less on the costumes (and in fact has a few more such that she has developed), and Leinir has designed a black wolf.