Cassie Collins is a character in Extinctioners. 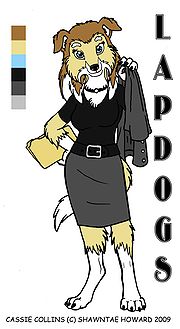 Cassie is from a family that has dedicated itself to serving the public in a variety of law and order occupations. Her father was Chief of Police before his retirement, and she has a brother that works as a public school teacher. She was a hard worker and good student in college, putting more focus towards her studies than her social life, which made her a bit of an outcast to many of her fellow female students, who loved the party life. She did have a romantic episode during college, but when her would-be love interest went away for military training, her life became her legal studies. Cassie graduated at the top of her class and made a fast track through the law pecking order. It was during her first case as Assistant D.A. that she met her first law defeat during an attempt to put the serial killer, Lynx Wylde away, thanks to some unorthodox evidence gathering from the local police (two hot dog detectives to be more specific). It was after the case that her life was put in danger by Lynx himself, but she was saved by Damion Pincer and Lynx was finally put away in jail.

Cassie has gained a bit of interest in Damion since her rescue, but it turns out her former lover from college has also resurfaced, causing her great emotional conflict. For once her eye isn't on just the letter of the law, and she finds making life choices (with a maternal clock finally ticking) is a lot harder than making an opening statement.